CYC Mentoring has a long history of creating life-changing bonds and friendships, but it’s an especially unique connection that results in a mentor standing as the best man in his mentee’s wedding. That’s exactly what happened with Lamont and Tim. For his exceptional presence in Lamont’s life, and the profound effect it had on not just Lamont, but his family, we are pleased to share Tim’s story as the July CYC Hero. 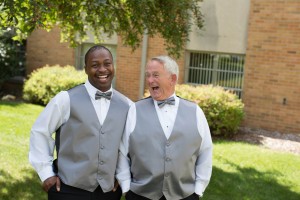 Lamont Watkins was growing up in Over-the-Rhine well before it was the hottest place to be in Cincinnati. Back in the mid-90s, his mother was doing her best, but times were hard and resources were limited. Recognizing that she alone could not give Lamont the opportunities he deserved, she enrolled Lamont in CYC Mentoring. When Lamont was in fifth grade, he was matched with Tim Clarke.

Tim had signed up to be a mentor after hearing a television promotion from one of CYC’s founders, John Pepper. His son had just moved away to college, and Tim was looking for something to fill the “empty nest.”  He was matched with several boys close to Lamont’s age and would meet them all at the library once a week. They would study for an hour, especially focusing on reading, and then all of them would go out for food – usually Skyline.

The relationships with the other boys faded over time, mostly due to lack of interest from the boys, but Lamont and Tim clicked. Tim declares that the reason they got along so well is due to Lamont being, “such a fine human being…Just a great little boy. He is genuinely nice.”

It didn’t take long for Lamont to become a part of Tim’s family. He would visit the Clarke household often, and became like another sibling to the Clarke children. Lamont did well in school, and with Tim’s encouragement went straight to college, enrolling in Wright State University.

Tim recalls, “At the time I had a Jaguar convertible, and I let Lamont drive it up [to Wright State]. I told him that if he got out of college with a degree, the car was his.” Unfortunately, the obstacles facing a first-generation college student are profound, and Wright State was not the right fit for Lamont. He completed only a few semesters before withdrawing. Faced with the subsequent student loans, he enrolled in the Army Reserves.

The military was a positive experience for Lamont; though he only signed up for four years, he remains active to this day and has achieved the rank of sergeant. And life just keeps getting better. Three years ago, he met his now-wife, Bethany, who was quickly introduced to the Clarke family. “Bethany has done a great deal for him,” shares Tim. “[Lamont] told me when he was going to ask her to marry him.”

The affection is returned. Bethany says, “Many of the wonderful qualities I see in Lamont, I also see in Tim. They’re both givers. They give their time, friendship, and generosity to everyone they meet.”

She credits Tim’s continued presence in Lamont’s life with Lamont’s continued ambition. He recently earned his Associate’s degree in Automotive Business and Management from Cincinnati State, and moved to Toledo for his current job at an assembly plant. He wants to finish a second Associate’s degree, and still dreams of a Bachelor’s degree. “Tim continues to push him into following these dreams,” says Bethany. “I think it’s one of the reasons Lamont is such a hard worker.”

At the fall 2014 wedding, Bethany was thrilled to see Tim standing beside Lamont as best man. “Lamont thinks the world of Tim,” she attests. “Out of all the people in his life, Tim is the one person he wanted standing next to him, the person he values as very important and trusts to be there for him on such an important day.”

The gesture was not lost on Tim, either. He was particularly moved by Lamont’s decision to forgo wedding favors, and instead make a gift to CYC on behalf of every guest. “When I saw on the place setting the little card, to give to CYC, I was unable to give the regular speech I had prepared, and I just had to thank him,” remembers Tim. “For him to want to give to CYC for this to happen to someone else…I got emotional. It was a great day.”

While Tim may have used his best man speech to thank Lamont, we at CYC use this moment to thank Tim. By sharing your wisdom, your family, your home, and most importantly your heart, you made an invaluable difference in many lives, but most importantly in the life of a vulnerable young boy who has since become a remarkable young man. You are truly a CYC Hero. 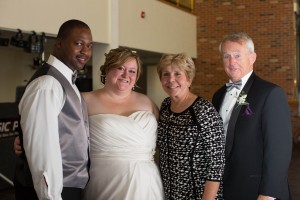 In the words of Bethany: “We are very grateful Tim came into our lives.”